Back in in the age of steam and the Intel 80286, after graduating MIT Katherine set off with friends on their bicycles to ride from Boston to Santa Barbara. She left behind with me two plush creatures (Binkley & Gunther) to help me track her progress.

After Katherine's ride, Binkley & Gunter joined her at UCSB; the staff shortage in Boston was corrected that Christmas by the arrival of Snuffles, the Plump Plush Platinum Programming Polar Bear (or Snuffles P. Bear for short). Snuffles was a happy resident of my (ever bigger) CRT monitors for ten years.


Alas, in ~2000 we moved to LCD monitors, and her position was literally eliminated (she is a plump bear); Room was made for her elsewhere in my office, but no creature bigger than Thomas Tech Bear could balance on the thin LCD monitors since then.

Until this month, that is. I discovered that one can buy stands for LCD monitors. Thus, she able to reclaim her time-honored position, joined by a few senior friends.

In Her Own Words

I just program for Drew because Binkley Bunny (who is as snowy white as I am) and Gunther Bear used to help Drew program from the top of kendra's monitor. They went west in September [1990] with Mom so that Mom and Binkley could work on their PhDs. That made the Wonderworks understaffed, so at Christmas [1990] Mom asked me to live with Drew.

My mom is very proud that I'm a computer literate bear. She also thinks Drew has gone off the deep end, although she doesn't mind.

Posted by Drew Derbyshire at 6:15 PM No comments:

One of the exercise pedals needed to be revised a week after our last visit.

With my bow-legged feet, there is a certain amount of toe-out stress on the pedals. This means sooner or later the straps with their hole can slip out of the friction fitted pegs on the pedal. The right pedal slipped out three times on two rides, so I took action.

I added Gear Ties under the pedal; they counter the toe-out force by pulling the bottom of the straps together; like a cotter pin on an axel, they don't apply force in the main (vertical) direction of the force on the strap, but keep it from falling off.

(The left pedal may need the same treatment. Not today.) 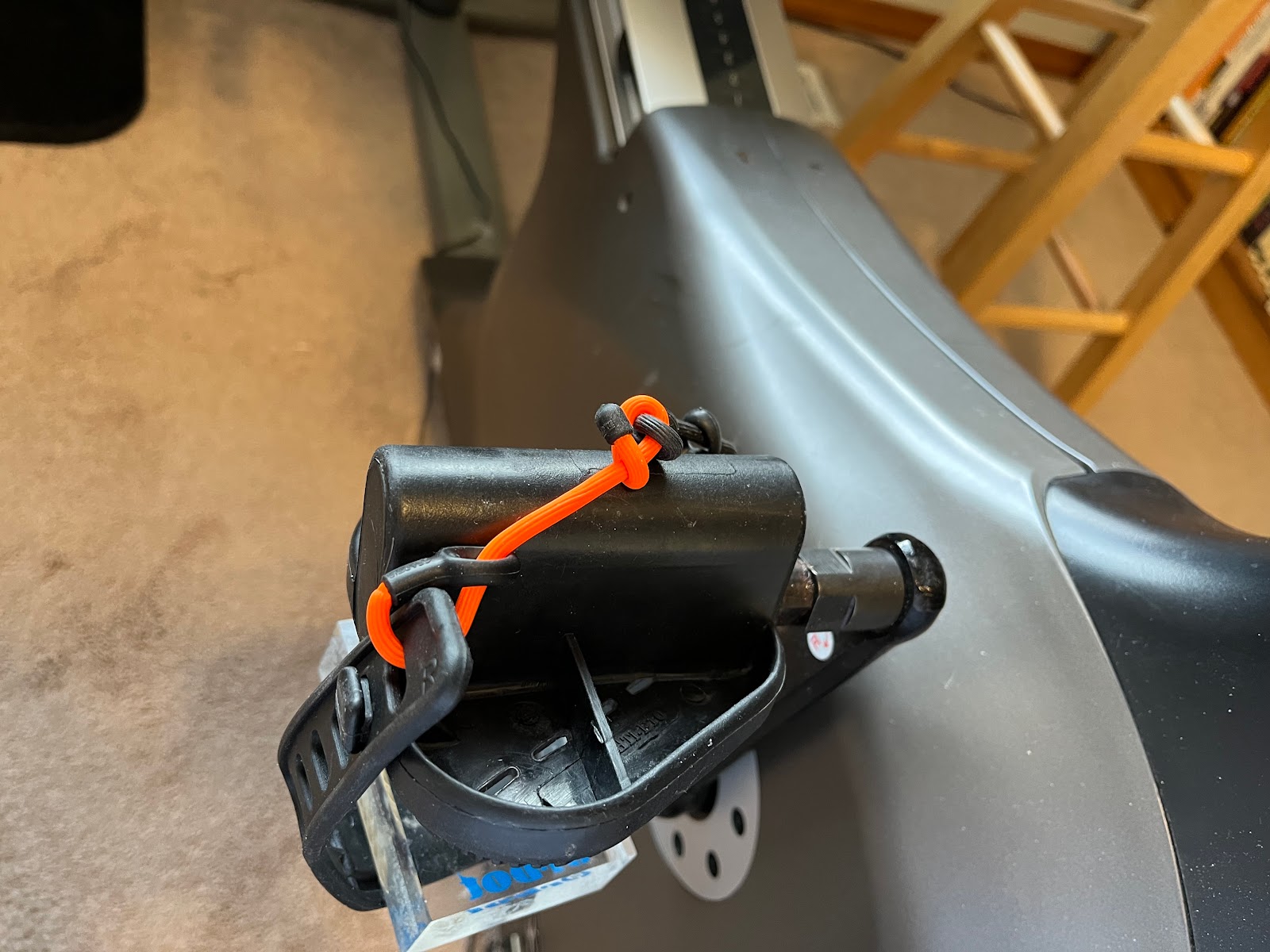 Underside View of Pedal with Gear Ties
Posted by Drew Derbyshire at 1:08 PM No comments:

Email ThisBlogThis!Share to TwitterShare to FacebookShare to Pinterest
Labels: Die With a T

Throw Another Brick on the Fire

Pity the oldest furnace contest was not in the Boston area when we first moved there; the winner in Syracuse had a furnace only from 1910. The Stoneham house was over a 100 years old when we bought it in 1995, with a oil fired steam-heat furnace which may have been older than the house. 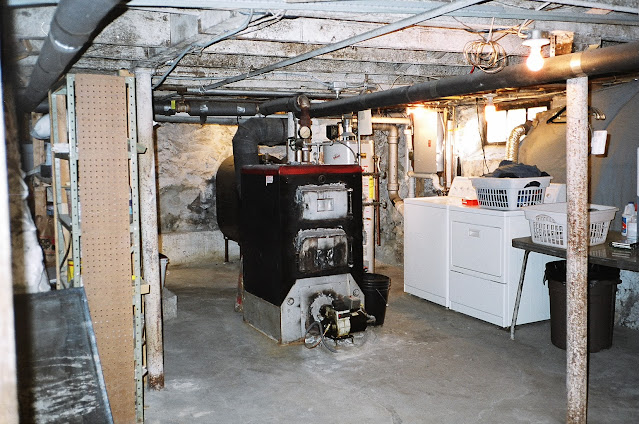 The Original Jurassic-era Furnace in Stoneham
Our furnace service person thought it was a conversion from coal, and we privately thought it was originally fueled by dinosaur guano. Not fossilized guano, but rather fresh guano straight from the  living source.

Around 2000 we had replaced the tank, which was leaking; we found a previous repair had been done with fiberglass … and oil eats fiberglass. When we replaced it, the 1500 gallon tank had to be replaced with two smaller tanks; I think they had to cut the old tank up to get out it of the cellar.

We already had gas service for the stove and hot water; in 2004 we replaced the furnace with an gas fired one. Not only did was it quieter running, the company figured out why our steam pipes banged (a low spot in a pipe), and we smoothed out our utility bills by going on a budget plan.

Posted by Drew Derbyshire at 10:51 AM No comments:

My exercise bike is ~ 19 years old; the threaded posts (in photo) pushing the pedals away from the cranks so the heels of my bow-legged feet don't hit them, are more like 29 hours old.

They became far more important as I tried to extend my ride time from 48 to 64 minutes. The problem was not the increase in overall length, that but it divides into 16 segments; going from 3 minute segments to 4 minutes on "hills" made me tired and therefore sloppy about keeping my feet straight. (Much banging of heels then occurred.)

The extenders work, too. I wish I'd found them years ago (It seems I wantedneeded to search for "pedal extenders" not "crank extenders"), but I've got 'em now. 🙂

My first 64 minute ride is now in the books.

My thanks to my usual bicycle engineer, Katherine!

Posted by Drew Derbyshire at 7:00 PM No comments: