A Time To Cast Away …

I learned to ride a bike when I was nine years old, the spring before we moved from Cowlesville to Skaneateles.

My sister had gotten a new banana bike for her 11th birthday, and I got her old one as a hand-me-down: A green girl's Huffy with 20" Balloon Tires and training wheels that my father had painted blue and put a hand-cut top tube on to make it boys bike. I needed only a couple weeks to lose the training wheels.

In my teens, I took possession of another hand-me-down, a 3-three speed from my brother which was a little too tall for my diminutive height.

In 1982, I got my first new bike while living in Endicott NY, a Miyata ten speed racing bike. (Yes, it later shared garage space with our Mazda Miatas.) The highlight of that bike was in the summer of 1985 before I returned to Clarkson for my final tour of duty when I sold my car and put over 1500 miles on the bike. I also used it for commuting in Potsdam and Kingston.

After 20 years, we replaced the Miyata with a Trek hybrid. The Trek never got the heavier use of the Miyata, especially after it was supplemented by Schwinn Airdyne (upright) and Vision Fitness HRT 2200 (semi recumbent) stationary bikes. The Schwinn Airdyne didn't last; the HRT 2200 has, and is the bike which moved up to my office last summer.

The Trek has not been touched since The Before Time. Sadly, with my mobility/balance issues, which especially cause problems mounting and dismounting bicycles, this spring I decided the Trek has zero future with me. Yesterday, we sold it to Play It Again Sports for a pittance.

That makes me sad, but I am heartened because the HRT 2200 has gotten used this month; I've already beaten last year's total (and seven other years since 2004), and it's only early June.

Maybe there is an adult tricycle in my future. We'll see.

Posted by Drew Derbyshire at 3:01 PM No comments:

Email ThisBlogThis!Share to TwitterShare to FacebookShare to Pinterest
Labels: Fitness

Everything Old is New Again

We're thinking of replacing our late-2015 27" iMacs with Mac Studios, which don't have monitors. While we could buy shiny new 4K-resolution monitors, it's overkill. 27" Retina iMacs by default run at only ~50% maximum resolution, and I wouldn't be able to see a thing at full resolution on an iMac or a new 4K monitor. And from my Mac Pro era (2008-2016) I have two 30" monitors with a full resolution which is about same as the default (50% resolution) of the iMacs. I'm writing this on of one them hooked to the iMac. I think this is an excellent intermediate and quite possibly permanent solution.

I just need to find my Webcam …

Email ThisBlogThis!Share to TwitterShare to FacebookShare to Pinterest
Labels: Watching the Blinking Lights

I haven't heard that name in years …

I commonly write my name as "Drew Derbyshire", but for legal purposes my full name has always been "Andrew H. Derbyshire"; the former never has my middle initial, and the latter generally does. Unfortunately, people tend to shorten my birth name to "Andy", which my mother (and by extension, me) disliked.

Thus, I've used "Drew" since August 1985; I switched when returning to Clarkson for my final undergraduate tour of duty. My login was "$AHD" or "ahd", but my email said I was "Drew Derbyshire", and people simply accepted it. Now, decades later, I still use "ahd" when I can, and there many people who have no idea where the user id comes from.

Earlier at Clarkson (as a freshman) when I still went by Andrew, I first learned the ancient incantations of IBM OS/360 and its Job Control Language (JCL). I extensively used it in my work well into the Drew era (1995 or so). OS Jobs run with JCL start with a JOB card; it has an account number, a jobname (often based on the account), and a 20 character field for the programmer's name and job description (printed on the green bar listing to keep it from becoming Little Listing Lost).

(Of course, when was last time you even saw green bar paper? But I digress …)

Meanwhile, I've written before about my muscle memory on computers. I'll go to do something on an old IBM host, Microsoft box, or UNIX system and I can't remember how. However, my fingers tell my brain to "Stop thinking … we are on the case". So my head listens to the stereo, and they summon the ancient incantation and bang it out.  Usually, it's right.

Lately, I've been playing with OS/MVS systems (the successor to OS/360), including writing jobs on it. Yesterday, I noticed my magic fingers had taken charge without bothering to tell me, as shown by the attached.

When I looked at that job the last night, I realized my fingers were indeed trained to write OS JCL in the "Andrew H. Derbyshire" era. Well, that's what they still do, and who am I to argue?
Posted by Drew Derbyshire at 7:51 AM No comments:

Our first HD (32") TV, bought for the Red Sox in 2004 World Series, now sits quietly in the library with an HDMI switch and various spare media equipement — a DVD player, an older (unsupported) Roku, Chromecast, and a stereo. It cannot pick up live TV because it lacks a digital tuner.

(If it died tomorrow, I could stuff a spare 30" Dell monitor in the TV's place with the monitor's line jack out feeding the stereo, with zero loss of functionality.)

Email ThisBlogThis!Share to TwitterShare to FacebookShare to Pinterest
Labels: Watching the Blinking Lights

End of an Transportation Era


I became a member of Zipcar (the hourly car rental company) on July 23rd, 2005.  As I recall, I mostly signed up in order to rent a MINI Cooper for an extended test drive of the brand. We liked it, and we purchased what became our 2006 MINI Cooper S, PURR MORE the Green.

That car took us round-trip coast-to-coast and set our record for length of vehicle ownership, so clearly we choose well.

I know the date because (for the first time in years) today I logged in, and I glanced at my account as I cancelled my membership.

Zipcar has been free for me for years as a (former) Google employee, but that's getting to be a long time ago — now they are moving my account to their $70 standard annual plan and retiring my previous membership plan.  (Which makes me wonder if current Googlers are being moved as well, but not enough to ask.)

It was occasionally useful me when it was free, but it wasn't worth paying for. Likewise, it could be useful for Katherine when she still traveled extensively for work and took day trips down into the Silicon Valley.  Even before the pandemic, her travel dropped off over the years to where she didn't even go to the last SEMICON West before the pandemic. (That broke a streak of ~25 years.)

Email ThisBlogThis!Share to TwitterShare to FacebookShare to Pinterest
Labels: Personal

The Power Hit Catalogue (No expects the Spanish Inquisition!)

The tools you need for a longer power hit has appeared in the Wirecutter by the NY Times.

While PSE has greatly improved our system reliability since we moved here, one should be prepared. Thus I took inventory based on their list:

We don't have a generator, portable power station, or power inverter.  With three 1500 VA UPS units, we do have basic power reserves, and have never really felt the need for more.

We also have things other devices which don't need A/C that the Wirecutter didn't mention:

Katherine notes our freezer is good for keeping things frozen for 24+ hours without power.

In case of a Zombie Apocalypse or lesser event (the Pacific Northwest is earthquake country), we also have Go bags and cat carriers for bugging out. The inventory of those bags is not included above. We really need to update all the perishables in those bags.

Posted by Drew Derbyshire at 12:15 PM No comments:

Email ThisBlogThis!Share to TwitterShare to FacebookShare to Pinterest
Labels: Personal

I rode on my usual schedule of every other morning; due to minor distractions, today wasn't quite as far as Wednesday. Given I did get reasonable mileage in, and that my legs had trouble holding me up after I slid off the bicycle, I guess I did a decent amount of work.

As they say in Weight Watchers, "Progress, not Perfection".

I really detected that  my legs were wobbly when I crouched to swap my water bottle for a post-ride Cherry Coke Zero in my tiny office refrigerator (loaded only yesterday).

The new refrigerator is both a reward for my riding regularly, and an accommodation of my knees not wanting to do the stairs too often (and not wanting to bother Katherine, either). It also makes a refrigerated prescription that I take weekly more accessible.

My now riding regularly was highlighted in two small ways this morning:
I have long way to go, including fitness not related to the bike and making other accommodations as needed, but . . . progress. 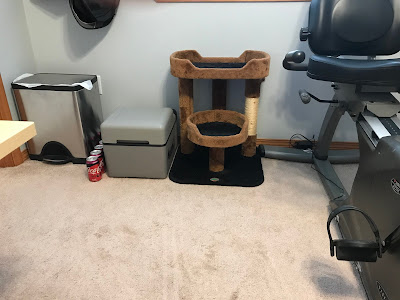 New Refrigerator Between the Cat Tower and the Wastebasket
Posted by Drew Derbyshire at 12:19 PM No comments: