I went through a lot of technology during my first 12 years years of PC ownership, where I iterated through computers every two years and constantly updated our voice and network connectivity. In 1995 we moved into our first house; after two years we had a basement full of accumulated techno-crap, which I cleaned up and out. I re-organized all the spare gear I kept in the dungeon into four storage tubs:

They labeled were with a sequence number and year, as in: 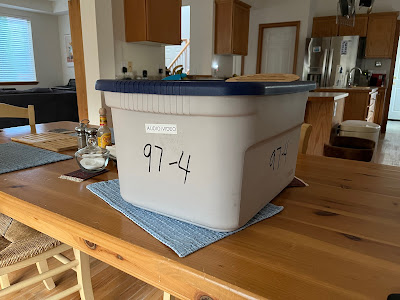 I thought I would be at adding them in the following years.  That didn't happen, which is a good thing. The reasons are subtle, but obvious in hindsight:

So I've still got the four cartons, but things go in and out of them far less often.  This may be first I've reached in that box for a coax cable since we moved here.
Of course, my office closet is several times the size of the one in Stoneham, and has everything from backup drives to (many) flavors of USB and other cables. Now if I could get it cleaned & organized …

… maybe there is a fifth tomb, the size of a small room.  Sigh.
Posted by Drew Derbyshire at 3:54 PM No comments: